Which industries advertise the most on youtube.ch? And how has the reach of YouTube advertising developed in recent months compared with the previous year? For its YouTube branding report, Webrepublic systematically collected two years of data to get concrete answers to these and other questions. 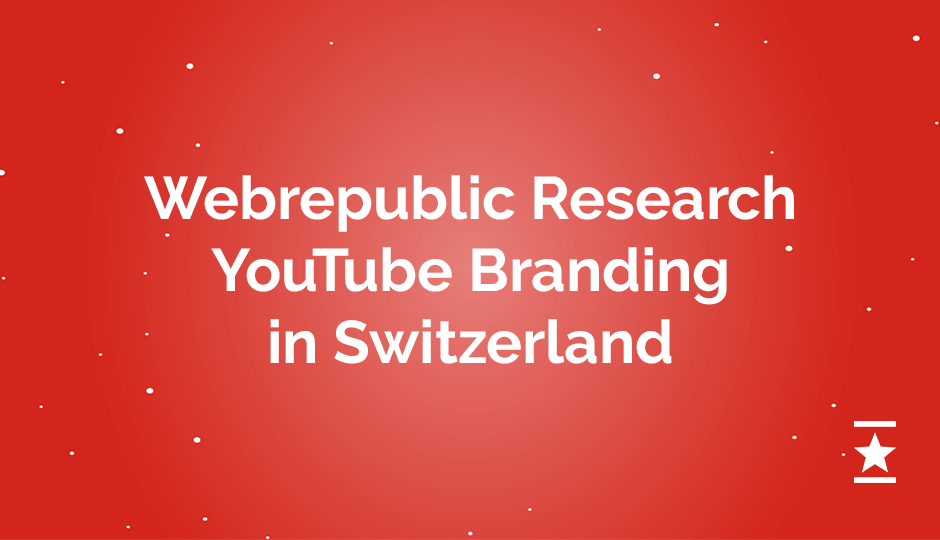 We have been monitoring masthead utilization on youtube.ch since Q3 2014. We gather data for all mastheads on youtube.ch using an automated script. We systematically evaluate the data collected and analyze utilization by season and weekday, along with segmentation by industry. This report focuses on developments over the last four quarters and compares them with the previous quarters.

YouTube is the leading online video platform in Switzerland. 2.6 million unique users visit the site each month from their desktop alone, which corresponds to 46.6% of Switzerland’s online population. However, these figures represent only a fraction of all unique users. We assume that about 50%- 70% of YouTube use takes place on mobile devices.

For advertisers, the popular YouTube platform has evolved to become a highly lucrative advertising channel. YouTube visitors encounter advertising that enjoys a high level of acceptance. The masthead on YouTube has become a wellestablished branding instrument for achieving wide reach in addition to being attractive and effective. The mobile segment is the main driver of masthead traffic. About 75% of all masthead impressions are generated by sponsored videos on mobile devices.

A look at seasonal utilization of the mastheads reveals that the advertising pressure on YouTube continues to grow. Ads generate a total of 4.3 to 5.5 million impressions per day on the youtube. ch landing page as well as on the mobile pages and apps. Since the beginning of 2016, recordbreaking figures as high as 6.4 million impressions have been seen – 31% above the top figures in 2015.

Tip: Advertising pressure has significantly increased over the previous year. The timely booking of mastheads is crucial to your success. It is not the ‘early movers’ who are beating the competition – it’s the ‘early bookers’.

Mastheads continue to generate more impressions from mobile devices all the time. The mobile share at the end of 2014 was two thirds and continued to grow during 2015. In Q2 2016, more than three quarters of all masthead impressions were generated in the mobile segment. This trend is sure to slow down.

Mobile users see a campaign video instead of the masthead when they go to the youtube.ch landing page. Experience has shown that really wellmade videos achieve impressive view rates of up to 40% – in other words, the quality of your video is critical to the success of your campaign.

Tip: Do you want to achieve lasting brand awareness among mobile users? Then invest in production of videos of outstanding quality! 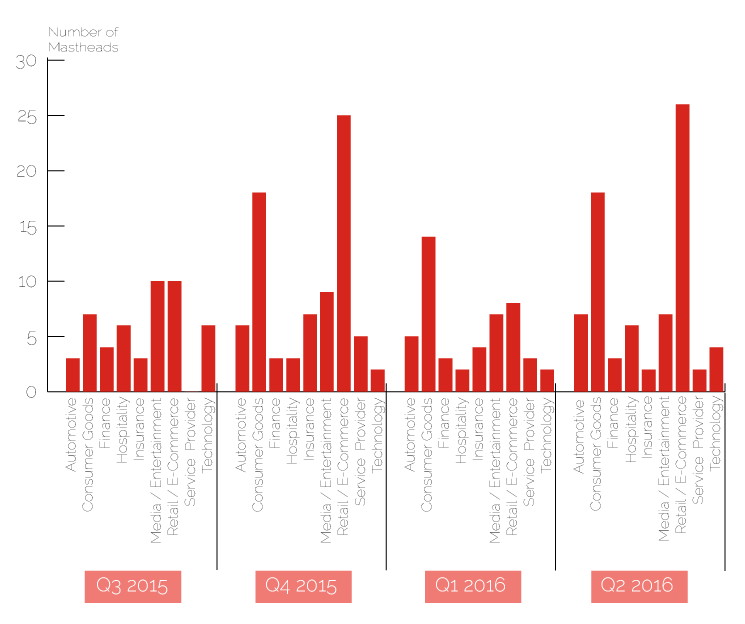 The breakdown by industry between Q3 2015 and Q2 2016 paints a very clear picture: while consumer goods were responsible for the highest level of advertising pressure in the previous year, now it’s the retail/e-commerce sector. About 25% of all mastheads fall into this category; the figure for the previous year was 19.5%. The above-average advertising pressure is mainly due to the market entry of the online retail platform Siroop in Q2 2016. Siroop booked 11 mastheads in May 2016 alone.

The consumer goods sector shows the second highest level of advertising pressure at 21%, but this is 5% lower than in the previous year. For example, Nespresso has booked five mastheads since January 2016, making it one of the biggest spenders in terms of brand advertising on YouTube. And because many key players run online shops and benefit from online purchases, it’s no surprise that digital advertising plays a disproportionately large role in both industries.

The media and entertainment industry has grown compared with the previous year and booked about 12% of all mastheads. Netflix alone booked 16 mastheads during the period under review. In the previous year, this industry was responsible for a miniscule share of advertising pressure (1.9%). In 2016, more and more traditional brands, which had previously held back on investment in digital marketing, are discovering the YouTube advertising formats. Consequently, we see that in addition to the well-known branding mastheads, product-specific mastheads are gaining a foothold as well. A rise in masthead bookings was also seen in the financial (+3.5%) and insurance (+1.5%) sectors. The automotive (7.5%) and tech (5%) industries remain roughly on par with the previous year.

The food and drink sector showed a slight downturn and booked about 3% fewer mastheads than in the previous year. As they have not booked any mastheads, the banking, telecom, real estate, industrial, healthcare, energy, pharmaceutical and research sectors are still below average.

Tip: YouTube mastheads also pay off for traditional brands. Gain a market foothold for your top products through the effective deployment of mastheads and ensure a digital edge over the competition.

YouTube mastheads achieve the greatest reach on Sundays, with the number of impressions generated at about 4.4 million, or 20% higher than the weekly average. The reach achieved on Saturdays dropped slightly in the yearly comparison and generated only 5.5% more impressions than the weekly average, putting it very close to the top weekdays. Monday is the quietest day of the week in terms of reach; it then increases overall through to Friday as the weekend approaches. Tuesday is an outlier, with figures on a par with Fridays. In other words, prices per contact are significantly lower on weekends than during the week. This is true both in the case of mobile and desktop.

Since our most recent YouTube branding report, the competitive situation has heated up in Switzerland and the competitive pressure for high-reach days has increased significantly. Compared with the previous year, the absolute number of booked mastheads in Q1 2016 increased by 95% to 61 and in Q2 by 46% to 80.

Tip: Is reach essential to your campaign? Plan for the long term and capture the most high-reach days, such as Sundays, for your display campaigns.

Reach is increasing continuously at 5.5 million impressions in Q2 2016 – more than 70% above the previous year’s figure.

YouTube users are not only more online-savvy than the average user, they are also considered to be high-spending opinion influencers: 88% go online daily and 52% regularly share content with friends. Their online savviness is also reflected in their consumer behavior. The group shops online more frequently than average; the likelihood that they will purchase gadgets or electronics is 4.7 times above average, and the likelihood that they will be an early adopter of new products is 2.4 times above average. Many users use YouTube as a search engine in their everyday lives, which is why the platform is considered to be the second largest search engine on the web.

YouTube continues to focus increasingly on formats and features for performance marketing. Branding has long ceased to be the main goal of all YouTube campaigns.